Salvatore Amorelli’s story begins in the year 1980, when this young man turned his passion for pipes in a real art. Mixing knowledge and imagination, together with flexibility and an appropriate use of the right skills, he succeded in letting people see a particular instrument, such as the pipe, from a different and new point of view, creating the chance of the discovery of a brand new world, made of unique pieces of work. Because this is what we are talking about. Mr Amorelli is considered, referring to his respectable career in this area of international commerce, one of the most important producers of pipes in Europe and in the whole wide world as well. His products can’t be considered just as ordinary goods, because of the particular and long work needed to create them.

We have already said, Mr Amorelli began his way towards success when he was only twenty but, despite from his young age, from the beginning on he has always been very convinced of the power of his idea, aware of his ability in working with wood, mixing it with light and precious minerals, creating throught this revolutionary fusion real jewels.

This is the case of a man who made of his work an art and a way of thinking and living a strong passion, like that one for pipes.

Every pipe needs a long and complex working process, which follows a specific development, made of different stages: each step has to be done without pressure and with extreme attention. First thing that has to be said concerns the important choice of the materials employed for the creation of an Amorelli pipe: the wood used is strictly seleceted by a professional team of technicians, who is going to choose the highest quality of mediterranean Erica briarwood, which the best quality ever can be found only in Sicily, due to the special and unique stright grain. After this crucial moment linked to the choice of the type of wood, it follows a delicate working process of  the wood itself: first step will be linked to the delicate cut and second the chosen wood will be boiled. After these first important moments follows a  quite long period of about five years of slow working process with the final aim of giving to it the right porosity and valid consistence, in order to guarantee an unforgetable smoke. Even if an Amorelli pipe is usually considered as a real piece of art, it never looses is original task, which is that one to be smoked, mantaining at the same time its exclusivity in its design and materials. Of course, some steps can’t be explained in their entire version and the reason for it is quite simple and understandable as well: like every great genius, also in this case, he’s got some secrets, which make of  his work such a special success and has to be mantained in coming years.

Basically, a pipe made by Amorelli’s hands is special, just like special are the people who have one

In fact, there are different series of pipes such as Roccella, Ghibli, Busbee, Frac, Lyra and Nail, able to satisfy even the most difficult client. But this is not the main aspect of Amorelli’s work. Because his pipes are pieces of art, his creator believes that there can be just on e kind of pipe for a specific man, who requires a special instrument, of smoke and of pleasure and proud as well. This is the reason for which Mr Amorelli is able to design, to elaborate and to create type of pipes unique in their field, just simply dedicated to the client himself. The craftsman’s  ability is the one to understand the need of the person who is standing in front of him and is asking for something never seen before and this is what Mr Amorelli is able to do with his clients. According to the person and his desires, he will create a pipe that rapresents his passions and willings, making a dream come true. Starting from a detail of an Amorelli pipe, which is now a real brand of it, it refers to a delicate bar made of pure gold, put in the middle between the small pipe and the pipe mouthpiece, it has the final task to show the right position of these two parts of the pipe itself. A revolution introduced by Amorelli himself is linked to the Busbee mouthpiece, which is an innovative way of making it, because of a methacrylate piece introduced among three briarwood small bars.

Of course, as it has been said, Amorelli’s tradition goes more then over the normal way of working with pipes. Extraordinary and fantastic designs has been created for making the bowl more special then ever, and not only briarwood is used but, in order to let the pipe turn into a real jewel, wonderful minerals, such as diamonds and pearls, are mixed together with a precious material like  horns. This is the reason for which Amorelli pipes have a really high price, like high is the quality and the exclusivity given, also arriving to 50 thousands of Euros, such us the one narghilècreated for the Saudi Arabian King: HH Abdullah Al-Saud. 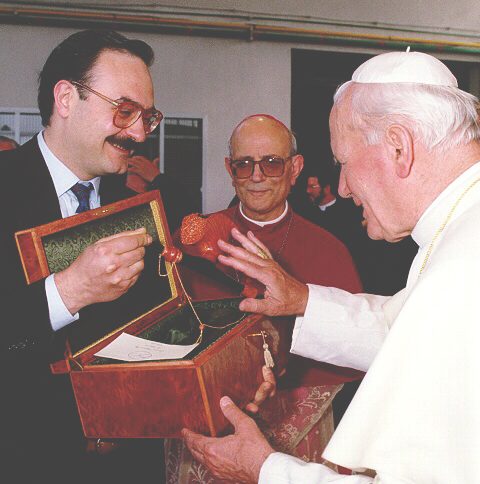 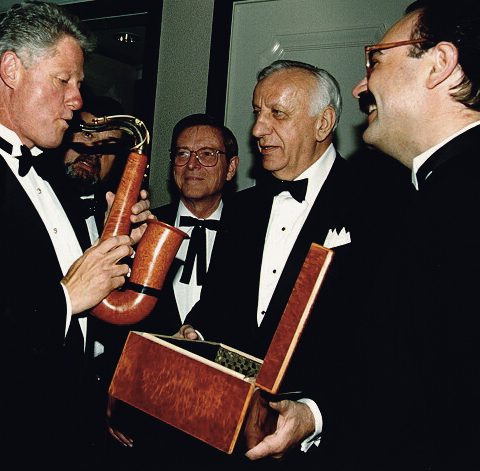 It is not a case that important persons like the Pope John Paul II and the ex Presisident of the United States, Bill Clinton, have an Amorelli pipe, specifically thought for them and elaborated by the great genius of Mr Amorelli. For Clinton’s pipe Mr Amorelli has been asked from the National Italian American Foundation, which rapresents more then 20 million italians living in USA.

Last new innovation introduced by Amorelli refers to the women collection called Pasternak, born from the co-operation with Ms Gudrun Pasternak, the last heir and nephew of Boris, author of Dr Zivago, elaborated as real jewels, using precious minerals, dedicated to a woman who wants to experience moments of relax, keeping the distance from anything and dreaming with pleasure.

If it is said that anything about a person tells his story and his desires, then also a pipe can do that, letting it become alive, and turning every breath of smoke into a moment of pleasure and awarenss of being one of the kind.

You can buy Pipe “Amorelli” in the shop and pay with these forms of payment: